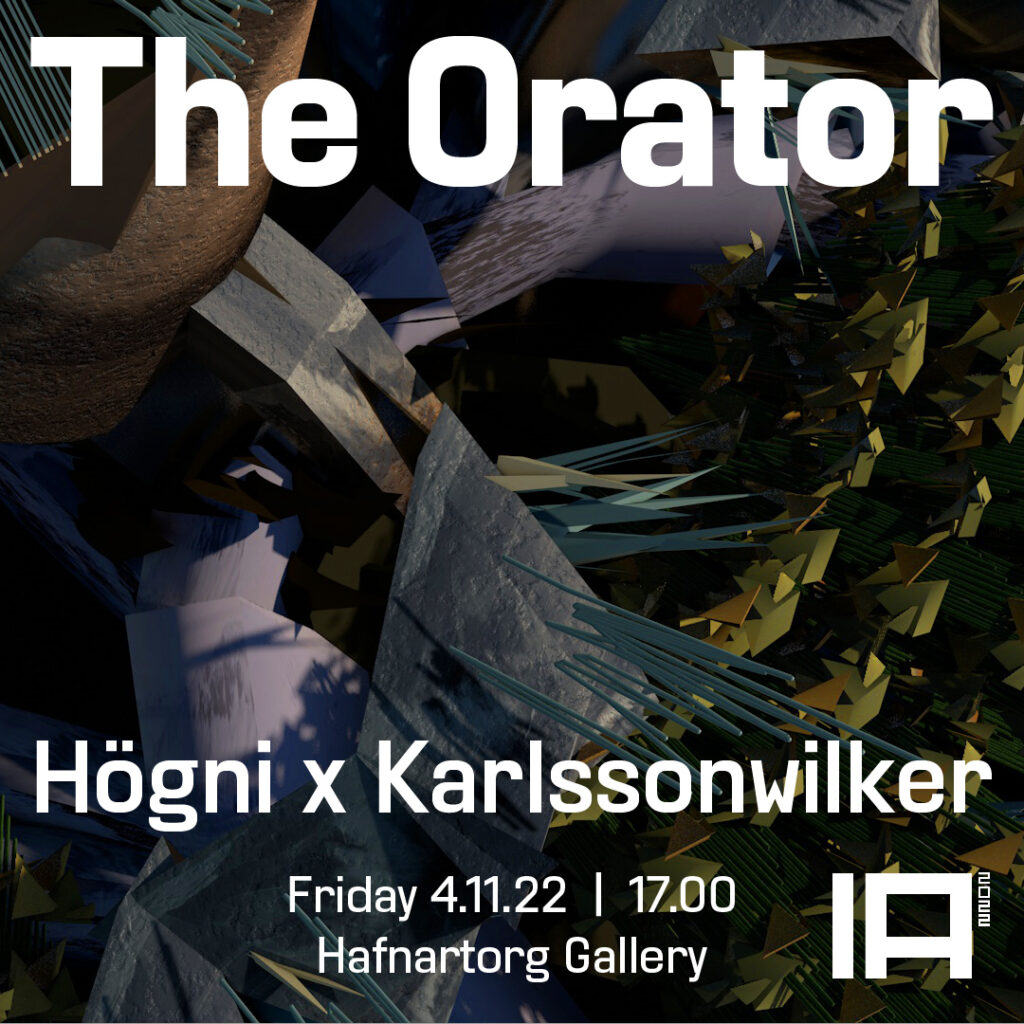 The Orator - Högni Egilsson and karlssonwilker

The Orator is a new multimedia piece by Högni Egilsson (singer, composer, producer and multi-instrumentalist known for his work with Hjaltalín, Gusgus) and solo) and karlssonwilker design studio in New York. The piece will premiere in Hafnartorg Gallery on November 4th.

Taking cues from ancient theatre and ritual ceremonies, The Orator is a contemporary mythical tragedy – the tragic event being climate change. We observe a chorus of eight wailing, wolf-like figures following the lead of an orating cello “through dark times and temporary havens towards the conclusion of our decaying world,” as Högni describes it.

Dione Lee from karlssonwilker describes The Orator as the story of a changing landscape through moving colours and shapes that react to the music. “Like our ecosystem, everything is related to everything else.”

Mutual trust between the two parties has been the key takeaway for everyone. “It’s very collaborative and it’s going to be very good. It’s exciting working with an artist who trusts you fully–and vice versa,” says Hjalti Karlsson, co-founder of karlssonwilker.

Hafnartorg Gallery is a new multi-purpose cultural and lifestyle space in downtown Reykjavík adorned with eight digital screens that form a sort of digital art gallery. The Orator is the first in a series of pieces to be performed/displayed in the gallery over the coming months and years.

For those mourning the dissolution of Daft Punk, now’s the chance to relive the magic “one more time.” Daft Punk’s 2001 album, Discovery is perhaps France’s best known ambassador for their unique synth pop. On closer inspection one can hear the influence of French organ music at the turn of the 20th century and understand why the pipe organ is called the grandmother of the synth. Organist and composer Kristján Hrannar Pálsson will play Daft Punk’s entire album, song by song, on Hallgrímskirkja’s Klais organ. A unique opportunity for Daft Punk fans!

This event requires a ticket, Iceland Airwaves wristband holders receive a 20% discount  and Airwaves Plus holders get a 50% discount. 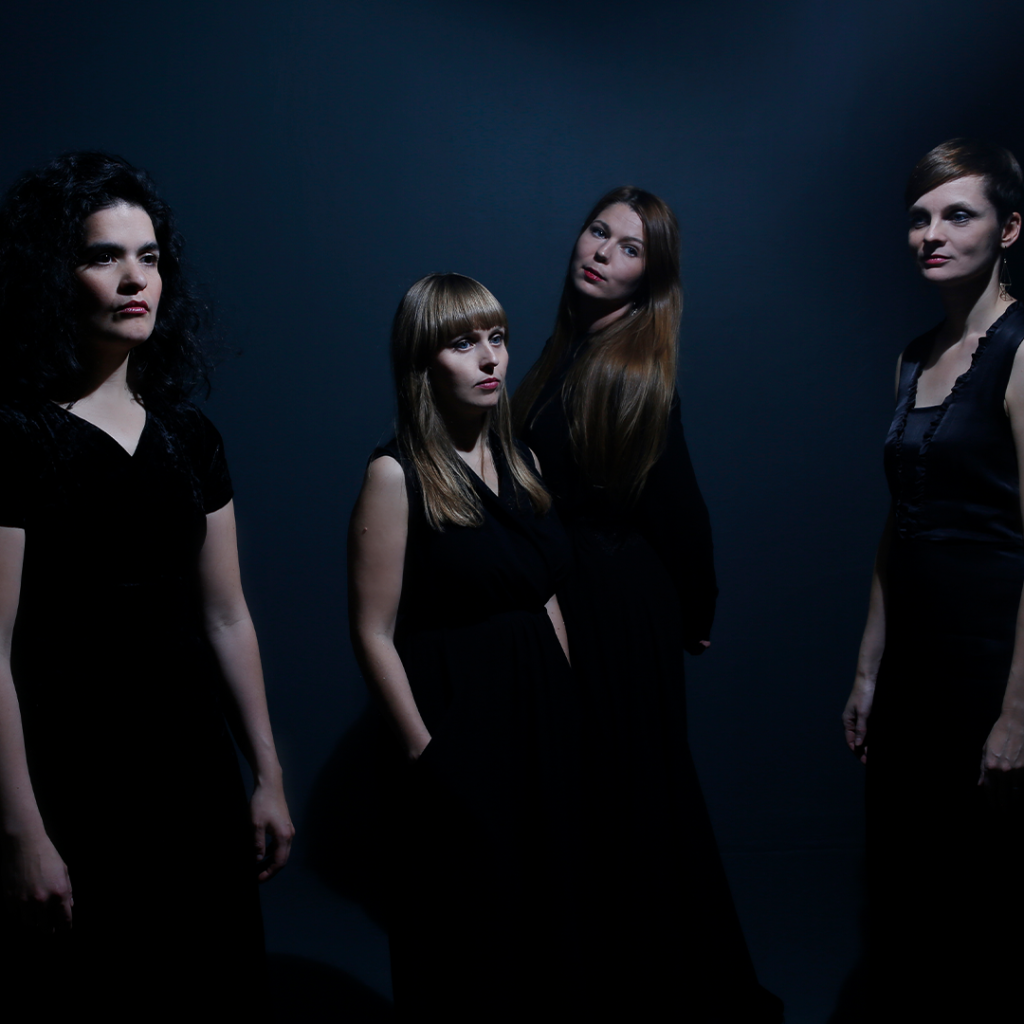 The Icelandic ensemble Umbra is critically acclaimed as “one of the most interesting ensembles” in Iceland, particularly for their musical ambition and “outstanding arrangements” in the field of ancient and traditional music. Umbra was founded in 2014 by four female professional musicians: Alexandra Kjeld (double bass and vocals), Arngerður María Árnadóttir (celtic harp, organ and vocals), Guðbjörg Hlín Guðmundsdóttir (violin and vocals) and Lilja Dögg Gunnarsdóttir (lead singer, percussion and flutes). From the beginning their vision has been to craft their own musical world with a distinct sound and unique delivery in performing both ancient and new music.

This event requires a ticket, Iceland Airwaves wristband holders receive a 20% discount and Airwaves Plus holders get a 50% discount. 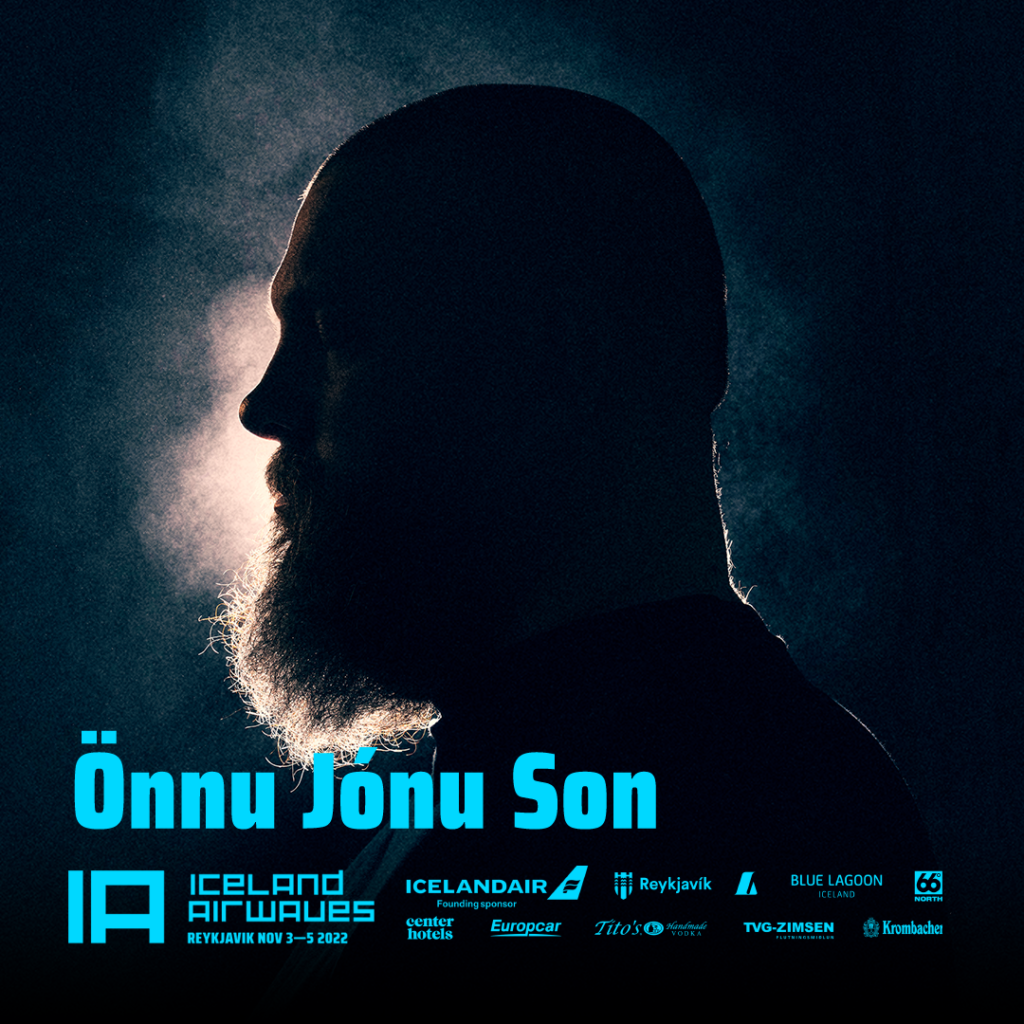 Iceland Airwaves will this year offer a novelty; an opening concert that takes place the day before the festival begins.

The opening concert will take place at 9 PM on Wednesday, November 2nd, at the Airwaves Center, another novelty this year. The center will host accreditation, a restaurant, a bar, and shows Thursday – Friday from the afternoon into the evening. It is open Wednesday – Saturday every day from noon-midnight. It is run by Iceland Airwaves, and for the first time ever, the festival itself will offer a place all day, every day, to hang out, mingle, eat, drink and see shows, open to everybody, no wristband needed.

This is also where guests pick up their wristbands, get questions answered about the festival, and get any assistance they might need.

The opening act is Önnu Jónu Son (ÖJS). It is the stage name of Haraldur Thorleifsson. The concert at Iceland Airwaves will be the first for Haraldur in over 20 years and his first under his new stage name.

Haraldur was active in the Icelandic music scene in the late 90s but took an extended hiatus from music to focus on his alcoholism, followed by a career as a designer, ultimately selling his design agency Ueno to Twitter in 2021.

The name Önnu Jónu Son refers to his mother, whom he lost when he was eleven years old. Haraldur has struggled with finding a path forward and finding confidence in himself as an artist and a performer. By wearing his mother’s name, he could use her memory, love, support, and nurture as protection from self-doubt or fear of external criticism.

In early 2023 Önnu Jónu Son will release the album The Radio Won’t Let Me Sleep. Half of the songs are written in the mid-90s and the other half in the past year. Each song will be released with new short movies made by artists from 11 different countries.

The songs are personal stories of love, loss, loneliness, and a struggle to find moments of happiness. Some of the newer songs are written about his experience dealing with muscular dystrophy and the experience of having a body that keeps failing him.

The Iceland Airwaves opening concert will be the first time the songs from the upcoming album will be performed live and heard anywhere. There won’t be another performance with ÖJS during the festival, and capacity is limited. Again, the concert is open to everybody, with no tickets or wristbands needed, and no sign-up process; just show up early and claim your spot.

Each Iceland Airwaves festival has countless memorable moments and everyone has their favorite memory. But this event is the favorite of many.

The residents of Grund nursing home invite us to spend with them one hour on the morning of November 3rd, the first official day of the festival.

Sycamore Tree and Júníus Meyvant will perform and the President of Iceland, Guðni Th. Jóhannesson will formally open the festival.

The ceremony takes place 10-11am on Thursday, November 3rd, it is open to all wristband holders but capacity is limited so be sure to arrive early. 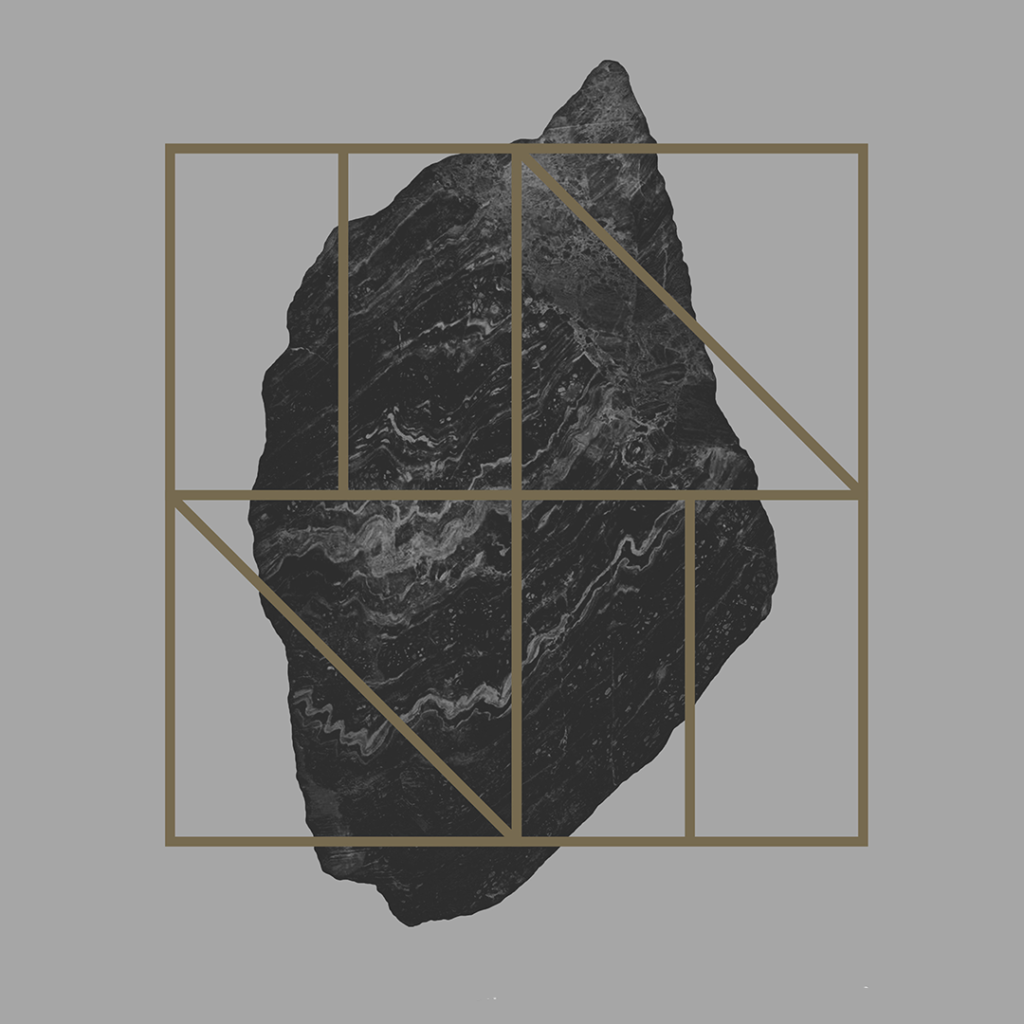 On November 2nd, Icelandic publisher & label INNI celebrate their 3rd Birthday with a full night of music from friends and family of the company.  Expect scent, choir, installations, and some of the most innovative artists in Icelandic music. 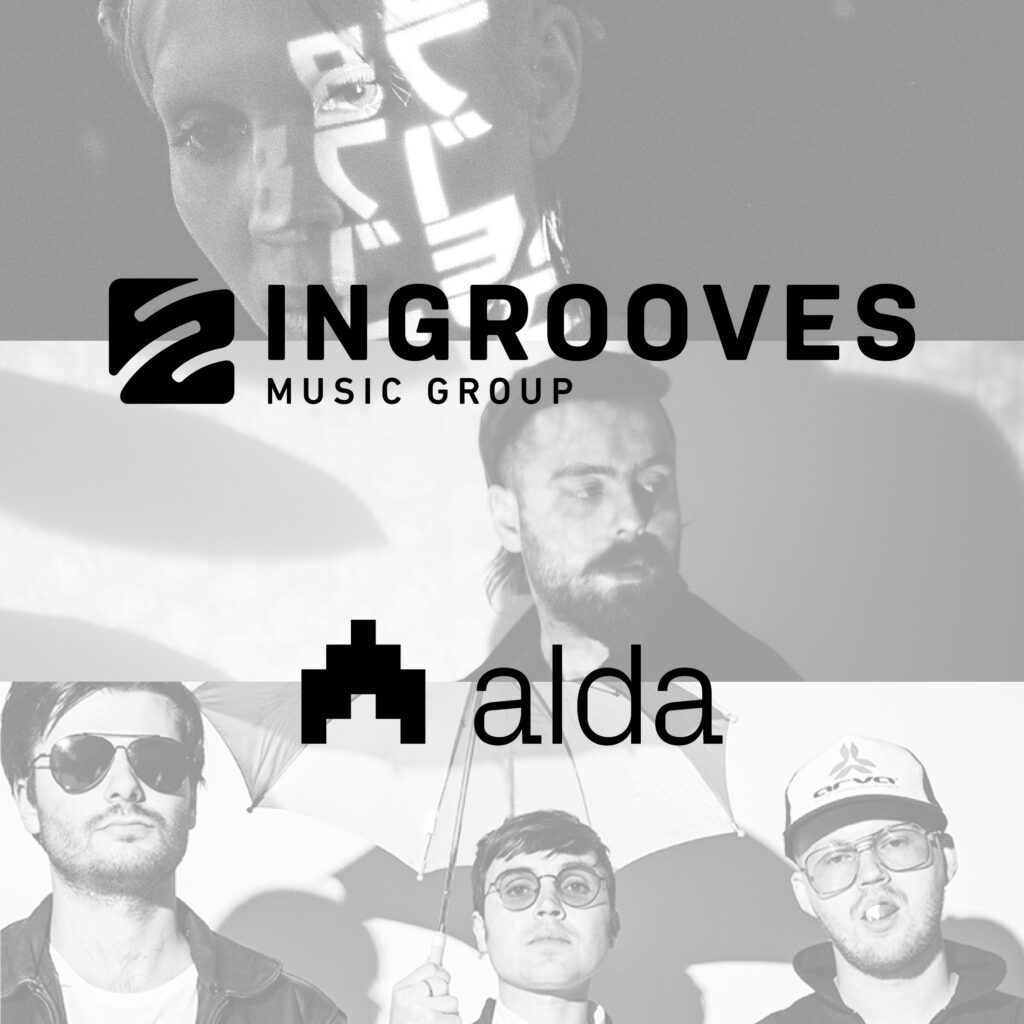 Ingrooves and Alda Music invite you to a pre-party at Art Museum on Friday, Nov 4th at 18:30. The party is open to all wristband holders but capacity is limited so be sure to arrive early to gain entrance. Airwaves Plus wristband holders will have priority at the door.

Tito’s and Krombacher will offer a 2-for-1 at the bar, and three amazing artists will perform:

The party will end at 20:00 when doors open to the offical evening program at the venue. A great way to warm up for the evening’s festivities, skál!